What was the Spanish Civil War?

The Spanish Civil started in  1936 and finished in 1939. The two sides in the war were the Republicans and the Nationalists. The Republicans were the democratically elected Spanish government with unions,  anarchists, communists, workers, and peasants. The Nationalist were the rebel part of the army, the landlords, the bourgeoisie and the upper classes. The war was started by General Francisco Franco when a group of the most influential generals from the part of the Spanish army based in Morocco carried out a coup d'etat. 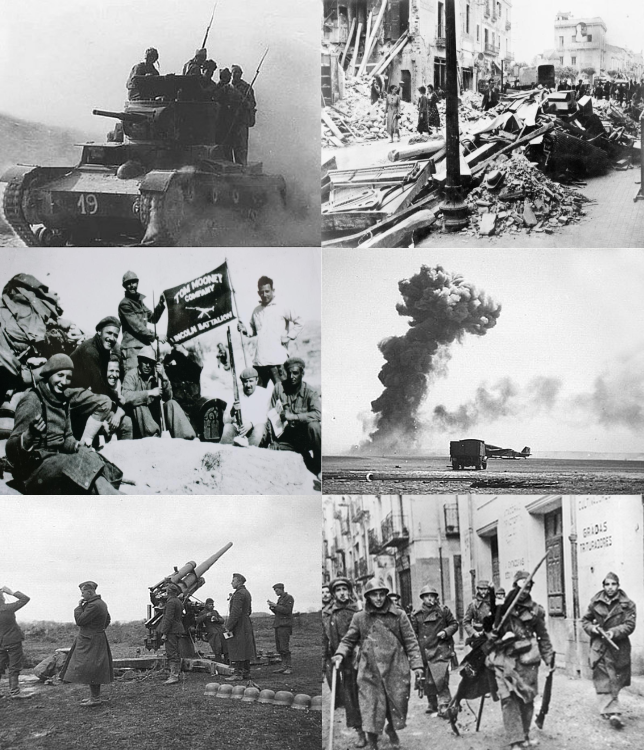 About 500,000 people died in the civil war. Of these, about 200,000 died as the result of systematic killings, mob violence, torture, or other brutalities. In some ways the Spanish civil war was a dress rehearsal for the second world war. The Nazis tested their new air force on the Basque town of Guernica in northern Spain. One-third of Guernica's 5,000 inhabitants were killed or wounded. This was the subject of the painting by Pablo Picasso which exposed the horror of the bombing in his famous anti-war painting called Guernica.

Several foreign powers intervened and supplied weapons and support. The Republican side was supported by the Soviet Union and the European democracies, while the Nationalist side had the support of fascist Germany and Italy. Britain was officially neutral possibly because they believed that the Spanish Republican government was controlled by extreme-left wing socialists and communists.
The USA also remained neutral.  The United States government took measures to restrict its citizens from selling arms to the Nationalists and Republicans.

The war ended on March 28, 1939, the victorious Nationalists entered Madrid in triumph. Spain was then ruled by Francisco Franco as a dictator for 36 years from 1939 until his death on November 20, 1975.