The 10 longest rivers in Spain

The longest river in Spain is the Tajo or Tagus. It starts in the mountains in the east of Madrid and ends up flowing into the sea at Lisbon. The biggest city on the banks of the Tajo is Toledo. There are not many settlements on the Tajo because most of the river passes through steep rocky valleys. It has a lot of hydroelectric dams.

The second longest river in Spain is the Ebro. It is the longest river to run its entire course in mainland Spain. Its starts in Cantabria and ends up flowing into the mediteranan at Tarragona. Before running into the sea the Ebro runs into the Ebro delta which is very fertile and and many agricultural products are grown there such as citrus fruits, vegetables, and rice.

The Ebro has a  discharge rate of 426 cubic metres of water per second  which is the highest in Spain.

The River Duero  flows from Soria, in north-central Spain, through to Portugal and it passes through the Northern Meseta and the city of Zamora.  It feeds the Ribera del Duero, which is an agricultural area famous for its  red wines. The drainage basin of the River Duero covers 16% of mainland Spain. 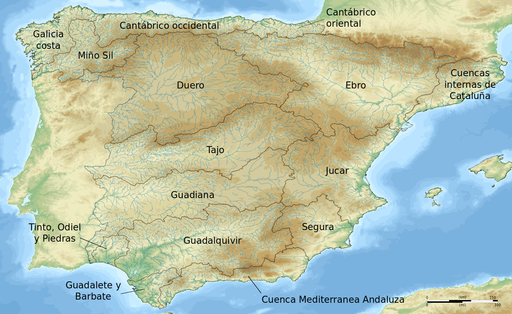 Of the five great rivers of Spain only one, the Ebro, pours its waters into the Mediterranean; the other four, the Douro, Tagus, Guadiana, and Guadalquiver, discharge theirs into the Atlantic; but of these last the Guadalquiver alone is wholly a Spanish river.

Many places in Spain take their name from water of some kind: there are forty-four villages or towns whose names include the word  "Aguas", 238 which include the word Fuente. (spring)  There are  144 Rios (rivers), 54 Arroyos (streams), 44 Pozos (wells), 9 Rio Secos (dry rivers), and about 600 Molinos or water-mills.

The rivers of the iberian peninsula provide little opportunity for transport by boat or barge. They tend to make short, rapid descents from their origins in the mountains, and most suffer from variations in flow according to erratic and unpredictable rainfall. Many Spanish rivers, even those with considerable volume, flow through steep banks that make them very difficult to use as sources for irrigation.