Barcelona's population as of 1 January 2016 was 1.6 million people. It is the sixth most populous urban area in the European Union. In 2016 about 59% of the inhabitants of the city were born in Catalonia and 18.5% coming from the rest of the country. In addition to that, 22.5% of the population was born outside of Spain.

Internationally, Barcelona's name is wrongly abbreviated to 'Barça'. However, this name refers only to FC Barcelona, the football club.

Barcelona has a humid subtropical climate with mild, humid winters and warm to hot summers, the rainiest seasons are autumn and spring.

(According to the linguistic census held by the Government of Catalonia in 2013) Spanish is the most spoken language in Barcelona  and it is understood almost universally. After Spanish, Catalan language is the second most spoken one in the city, and it is understood by 95% of the population, while 72.3% can speak it, 79% can read it, and 53% can write it thanks to the language immersion educational system.

FC Barcelona is a sports club best known worldwide for its football team, one of the largest in the world and second richest football club in the world.


The Barri Gòtic (Catalan for "Gothic Quarter") is the centre of the old city of Barcelona. Many of the buildings date from medieval times, some from as far back as the Roman settlement of Barcelona. Catalan modernista architecture (related to the movement known as Art Nouveau in the rest of Europe) developed between 1885 and 1950 and left an important legacy in Barcelona. Several of these buildings are World Heritage Sites. Especially remarkable is the work of architect Antoni Gaudí, which can be seen throughout the city. His best-known work is the immense but still unfinished church of the Sagrada Família, which has been under construction since 1882 and is still financed by private donations. As of 2015, completion is planned for 2026. 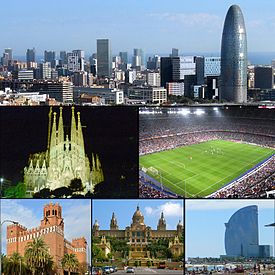 Barcelona is the capital and largest city of Catalonia, an autonomous community of Spain located on the northeastern Mediterranean coast. It is the second-most populous city in Spain after Madrid and the sixth-most populous urban area in the European Union. Barcelona is an important cultural, economic, and financial center in southern Europe, and is the main tourist destination in Spain.

Barcelona is located on the Mediterranean coast, between the mouths of the rivers Llobregat and Besòs, and is bounded to the west by the Serra de Collserola mountain range. The municipal population of Barcelona was 1,635,578 in 2020, while the urban area is home to 4,724,832 inhabitants and the metropolitan area has a population of 5,490,000. Barcelona is home to a number of important architectural works, including the basilica of the Sagrada Família and the Park Güell. It is also home to a number of cultural institutions, such as the Barcelona Pavilion, the National Art Museum of Catalonia, and the Barcelona Zoo.